A solid night over in Schiciano Auditorium at the Fitzpatrick Center for Interdisciplinary Engineering, Medicine and Applied Sciences (CIEMAS).  5 teams are advancing (not the usual 4).

Energy & Environment Track
The judges were: 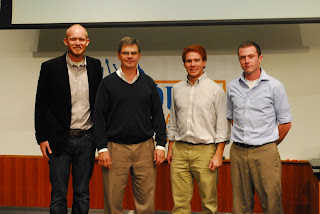 CarBone is a patented process that recycles waste animal bone, converting it into carbon electrodes for use in modern electronics.


(It should be noted that CarBone also won this track last year, but they are eligible to compete since they were not a finalist in the Investor Pitch Competition in the Spring. ) 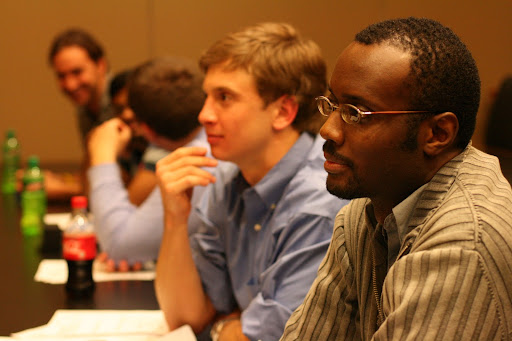 Camras Vision writes "We are providing ophthalmologists with a novel device, that can provide an effective first solution to glaucoma and stop the progression of blindness caused by this chronic disease."
ClearBolus is "a bolus for radiotherapy, with the novel property of complete transparency, allowing for more efficient and accurate skin cancer treatment."
* We had an administrative error (organizers fault, not the judges' fault) with the Audience Choice voting.  There was a tie (two teams had 6 votes), Medical Learning Games and Last Call.  The procedure is to let the judges break the tie. But when the information was passed from the MC to the judges, it was that "Team 1 and 5 are tied".  They looked at their sheets (not knowing their order was different) and they said "let's go with ClearBolus" (their Team 5).  (On a side note, it turns out that ClearBolus was already their Judge's Runner Up pick.)
We went forward with the announcements, not knowing there was an error. And we caught the error just after we announced that ClearBolus was the winner.  We paused the event, reconvened the judges and decided to break the original tie (Medical Learning Games and Last Call; they chose Medical Learning Games).  In addition, we didn't think it was right to tell ClearBolus they were now out.  So we added a Bonus Judges' Choice to let them in.  The Judges' Runner-up, it turns out, also went to ClearBolus (but was decided before the error happened).
Pictures of the event are here: http://picasaweb.google.com/hwr2duke/Day3OfTheElevatorPitchCompetitionPartOfTheDukeStartUpChallenge# (Thanks to Olgun Kukrer for taking the photos in both rooms)