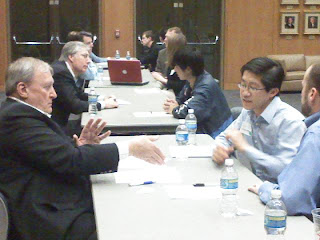 Recently had a chance to connect with Vincent Hsieh - and thought his story was worth sharing.  This is a re-post from a Fuqua Exchange (alumni magazine) article from 2007.

The CEO did a simple calculation. Each year, their warehouse shuts down for six days to count inventory. Each day, the company does $1.2 million in sales.

“So we’re losing $7.2 million counting inventory every year,” he stated.

And that’s when Vincent Hsieh, co-founder and VP for business development at Atlas RFID Solutions, Inc. (www.atlasRFIDsolutions.com), knew this CEO had seen the value of RFID (Radio Frequency IDentification) technology—and that Atlas had a new client.

It’s the kind of moment Hsieh and his fellow co-founder Robert Fuqua, President and CEO of Atlas, envisioned when they met in The Duke MBA—Cross Continent program’s Class of 2007, hit it off, and decided to start a company together.

In Operations Management, taught by Dr. Paul Zipkin, the two men learned about RFID technology and how it was being used in supply chain management. RFID uses radio waves to automatically identify people or objects. RFID tags can be read from a distance. Tag your inventory and track everything you own at the touch of a computer button. Hospitals can tag defibrillators and stretchers and locate them instantaneously. RFID is also great for tracking IT assets such as laptop computers and printers. The potential is limitless.

Although RFID technology has been around for decades, in the past two years its application has developed rapidly. Fuqua and Hsieh knew if they could get started now, they could position Atlas to be an industry leader when things really exploded.

“Vince and I both had visions of building a great company and how we’d want that company to look,” said Fuqua, who is a distant relative of the business school’s founder. “We saw that RFID would be the technology of the future, and this was a product we could build that company around.”

They started planning their new business, even as they continued their Cross Continent program and their full-time jobs: Fuqua as VP of Business Development for a pharmaceutical marketing firm and Hsieh managing the capital-raising group at a biotech. They enlisted Professor Zipkin as a senior industry advisor to “keep an eye on the forest while we are amongst the trees.” They meet with him monthly for industry updates, and having Zipkin on board has helped give the company immediate credibility.

Hsieh and Fuqua raised capital from twenty-three investors, including ten Cross Continent classmates. “Someone described Atlas as ‘the class project,’ because we feel like it’s our baby,” said Hsieh. “People have invested, advised us, or introduced us to potential clients, including in Dubai and China. You wouldn’t get those connections at most other MBA programs.”

By July 2006, Fuqua and Hsieh realized that if this new company was really going to happen, one of them needed to jump in full-time. So Fuqua quit his job and devoted himself to the new enterprise. Hsieh followed in November. Atlas bridges the gap between firms developing RFID technology and end users that stand to benefit from it. Hundreds of companies develop the various components of an RFID system. Atlas partners with the best and uses their technologies as a platform to develop, integrate, and maintain customized solutions for clients.

The company began fully operating in January 2007, even as the two men were completing the Cross Continent program. Atlas now has twelve employees: three with Hsieh in New York, the rest with Fuqua in Birmingham, Alabama. Already, they are working with clients in ten states and in Canada, and have built partnerships with technology developers in the U.S. and five other countries.

The biggest surprise so far, said Fuqua, is that they’ve been able to talk to more— and large—potential customers and gotten further in conversations than they’d expected at this stage. On the downside, the sales cycle is longer than anticipated. “Adoption is always an issue with an emerging technology. Our challenge is to change customers’ perception of RFID from a ‘nice to have’ to a ‘need to have.’ As more companies adopt this technology, it’s becoming a ‘need to have’ in order to compete, and the sales cycle will decrease.”

Another business challenge has been finding top-quality people to join their team. “We’re proactively looking for the most talented people we can find, and we’ll do what we can to bring them on board,” commented Hsieh. “It’s challenging at the beginning, because this is a start-up and obviously security is a question. But we’re overcoming that, and we’ve hired exceptional talent.”

The Cross Continent program gave them insight into hiring, building effective project teams, and creating incentive programs. It also taught them how to communicate effectively in a dispersed environment— something that has proven vital with the team split between New York and Alabama.

And said Fuqua, “Being in a global business program and meeting people from different parts of the world really changed my perspective on how we can do business internationally. I’d always dreamed of building a great company domestically, but I’m grateful to the program for teaching me to think globally.”

“Between the two of us, we invested $180,000 to go to Duke,” Hsieh noted. “We got our ROI back before we even graduated, in terms of investors, suppliers, potential clients, advisers, our education—and even meeting each other. Anything in the future is icing on the cake.”

Congratulations to our VCIC Regionals team

Congrats to our VCIC Regionals team.  Tied for 1st place (though ultimately lost the tiebreaker).
An all first year MBA team.
Coached by Amy Laverdiere, Jan Bouten, Jeff Boardman and others.
Posted by Howie Rhee at 1:30 PM 10 comments:

Email ThisBlogThis!Share to TwitterShare to FacebookShare to Pinterest
Labels: VCIC 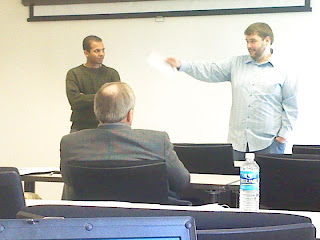 Mark Smallwood (Fuqua 2010) and Gautham Pandiyan (Master's in Molecular Biology, Master of Engineering Management) present the latest information on their startup to Don Haile, an investor. 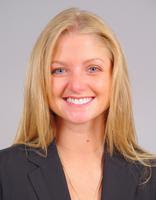 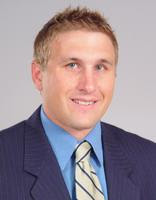 Congratulations to the new EVCC Presidents, Adam Mangone and Georgianna Golematis. I am thrilled to be working with them, and look forward to having a fun and productive year with them.
Adam has been a member of our new Program for Entrepreneurs, and has been a great person to have around.  He has a great background which includes being a director of marketing, and putting together an alumni program for his alma mater.
Georgianna is one of our Venture Fellows this year and is working at Idea Fund Partners.  She has a background as a software engineer at General Dynamics and was on the winning team of our internal VCIC competition and took a close 2nd place at the VCIC Regional competition.
So much of what we do relies on the efforts of strong students like Adam and Georgianna, and we appreciate them stepping up to the plate and leading the club this year.
-Howie
Posted by Howie Rhee at 3:47 PM 15 comments:

Here's a rough breakdown of the 35 plans that were submitted.
-Howie
We had 35 business plans submitted for the Duke Start-Up Challenge this year (up from 19 last year).
See attached for the brief descriptions of the 35 competitors.
By my count we have:
(I allowed one competitor to be in multiple categories)
Posted by Howie Rhee at 4:06 PM 3 comments: 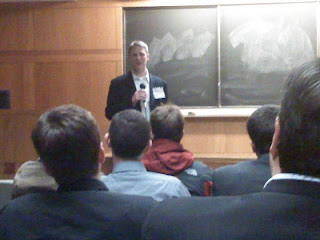 Deadline just passed and good news - up to 35 business plans submitted, up from 19 last year.

And winner gets a free DUhatch office. 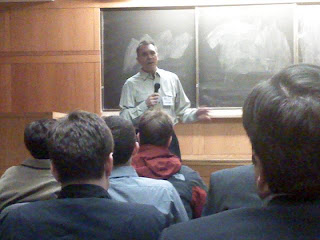 'We think entrepreneurship is one of the ways to solve the world's problems.'

'Skills of entrepreneurship are way of making things real.'

'This is an opportunity not to be missed'

'We want to be connected to all the entrepreneurship activities on campus.'

Jon is the Executive Director for the Center for Entrepreneurship and Innovation at Fuqua. 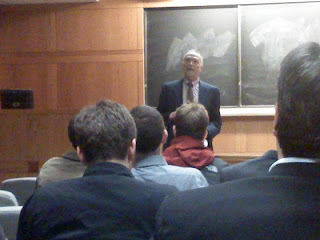 Dean of the nascent Sanford School of Public Policy.

'We support DUhatch with great enthusiasm.' 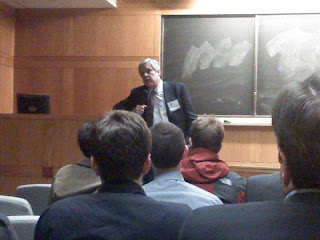 Talking about the new 5-school entrepreneurship effort. Dean McLendon is a serial entrepreneur and dean of the Trinity school of arts and sciences. 'We're delighted to be partners with our other schools in making this opportunity available to the full range of students.' 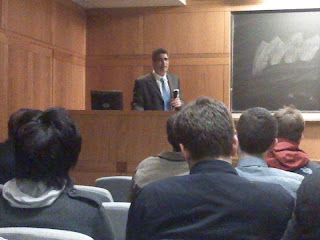 'both a raising of human capital and of venture capital'

'this is about empowering students, applying knowledge in the service of society'

Posted by Howie Rhee at 6:11 PM No comments: 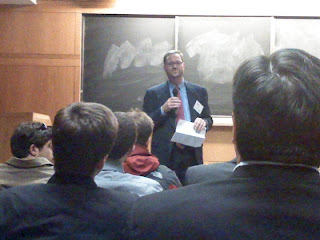 1000 plus at the Biotech Conference. Bev Perdue keynote picture. 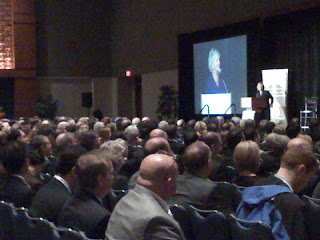 sent from my treo
Posted by Howie Rhee at 1:58 PM No comments: 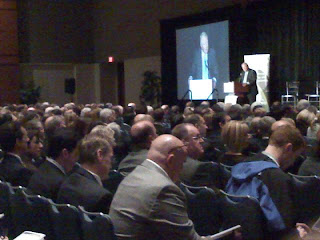 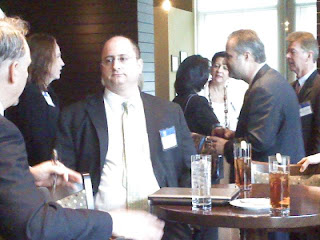 A nice lunch at Fin's Restaurant in downtown Raleigh before the Biotech Conference.

Wrote the following blurb about DukeGEN - thought it might be useful to post here as well.
-Howie
The Duke Global Entrepreneurship Network (DukeGEN) is an online network for Duke's community of entrepreneurs (both  alumni and students). Through DukeGEN, Duke entrepreneurs can both connect with other Duke entrepreneurs and get answers to their questions related to starting a company.
The goal of DukeGEN is "to be a sophisticated and active network that helps create debate, dialogue, and lucky encounters between Duke entrepreneurs."  Founded by T. Reid Lewis '84, Michael Cann '95, Jon Fjeld '90, and Howie Rhee '04, there is a small committed group of volunteers that are "providing the energy and coordination to encourage Duke entrepreneurs, around the globe, to connect and increase their chances of success."
Since DukeGEN was started in April of 2008, the group has successfully proven it's value to Duke's entrepreneurial community. Notably, DukeGEN now has over 700 members on LinkedIn (and about 90 on Facebook, and 188 members on the Google Group).  In addition, there are some good discussions going on (94 discussions on the Google Group, 26 on LinkedIn).
Questions that have been posted on DukeGEN have ranged from "how to split equity between founders" to "whether the venture capital model is broken" to getting specific advice for starting companies in "wound care" and "apartment rentals".
All Duke alumni and students are welcome to join.  Go to www.dukeGEN.com for more information. 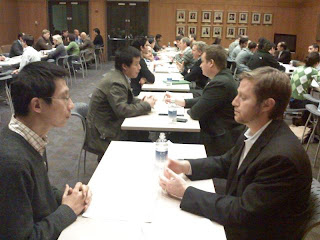 Recent event - this was the CEO Workshop we held here at Fuqua in Faculty Hall on Thursday, February 5th. We had 22 local startup CEOs and about 30 students, and they "speed networked" for 10 minutes each, to talk about startup issues.

It was a solid event.