Run It By The Pros event in Kirby Reading Room, Fuqua. 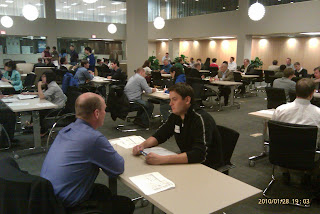 Part of the Duke Entrepreneurship Education Series and preparation for the Duke Start-up Challenge.

Entrepreneurship and technology innovation have the potential to raise our nation out of its economic downturn. Making this happen requires everyone to step outside traditional roles. In particular, centers of higher education have a responsibility to cultivate better marry technical fields with those of business and entrepreneurship.

With this in mind, Duke's Pratt School of Engineering and NC State's College of Engineering invite you to a high profile event designed to help prepare the next generation leaders to address the "grand challenge" level issues that will shape the 21st century. The Summit will touch on all fourteen NAE Grand Challenges through a discussion of American innovation and competitiveness and will be of interest to all disciplines. Participants should leave the Summit with a heightened awareness of the link between technology innovation and public policy on the world stage.

Why YOU should attend this conference:

Jeff Immelt, CEO of GE, will open the Summit with a call to action on the NAE Grand Challenges. Immelt has been named one of the "World's Best CEOs" three times by Barron's, while GE was named "America's Most Admired Company" by Fortune magazine and listed as one of the "World's Most Respected Companies" in polls by Barron's and the Financial Times.

John Chambers, CEO of Cisco, will present a keynote address on American innovation and competitiveness and will then lead a panel discussion. Chambers has been recognized as one of Time Magazine's "100 Most Influential People," one of Barron's "World's Most Respected CEOs," the "Best Boss in America" by 20/20, and one of BusinessWeek's "Top 25 Executives Worldwide," among many other awards.

Senator Ted Kaufman will discuss Congress' response to the Grand Challenges. Kaufman is the junior U.S. Senator from Delaware, appointed for two years to fill the term of former U.S. Senator Joe Biden. As the only serving U.S. Senator who worked as an engineer, Kaufman has advocated for a renewed emphasis on science, engineering, and innovation to meet the increasing challenges of a competitive global economy.

Jeffrey Wadsworth, the president and Chief Executive Officer of Battelle Memorial Institute, will also participate in a broad ranging discussion on American economic competitiveness and innovation. During his Battelle career, Wadsworth has led a period of rapid growth as Laboratory Director of the Oak Ridge National Laboratory, where he presided over the Lab's emergence as the world's leader in neutron science, nanoscience, and high-performance computing. In 2005 he was elected to the National Academy of Engineering in recognition of his scientific contributions to their literature and for scientific leadership supporting national security.

The cost to attend the Summit is $20 for Duke students and faculty.

The Grand Challenge Summit Series (http://www.grandchallengesummit.org/) represents a commitment to sustain critical dialogue and engagement with grand challenge problems and to change the way we educate our students in order to better prepare them for the challenges ahead.

Come join in this important endeavor.