29 Duke University undergraduate-led start-up teams pitched their business ideas tonight at the second sequential day of the Elevator Pitch Competition. From a company designed to pay users for watching commercials to a high tech firm promising batteries made from bones, diverse, innovative, and intriguing company concepts were presented before a live audience and judges - each team vying for a spot to compete at the Elevator Pitch Finals with Greylock Partners. The Elevator Pitch Finals competition will be held on November 12th at Fuqua, and the entire Duke community is invited to attend. That night, each of the two winners from the 8 tracks of enterprises will be allowed to compete for the $5000 cash prize selected by the judges and a $1500 audience choice prize which will be selected by the viewers using live text message voting.


Live from Duke University
Hosted live by Vidhan Agrawal (Pratt’12) and Dovina Qu (Pratt ’12) at Duke University’s Bryan Center, each of the 29 competing start-up teams were given exactly 1 minute to convince the judges why their company deserves to be funded with a seed round of investment capital. Judging the event was a panel of seasoned start-up business professionals:


Competition among the teams was tight. Well prepared pitches and passionate pleas for funding heightened the excitement of the evening’s already electric, entrepreneurial atmosphere.

Pictures of tonight's event can be found here: http://picasaweb.google.com/hwr2duke/Day2OfTheElevatorPitchCompetition2010DukeStartUpChallenge# 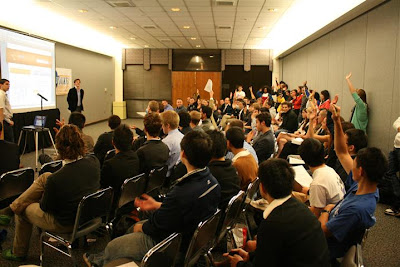 For this track the rule was: "Whoever is pitching must be an undergrad, and the same people pitching in this track must pitch in all other tracks and in the Finals."
Tonight’s competitors were:

Track 2
Each Track produced an:
In addition, a Best Freshmen-led Team* prize was awarded. 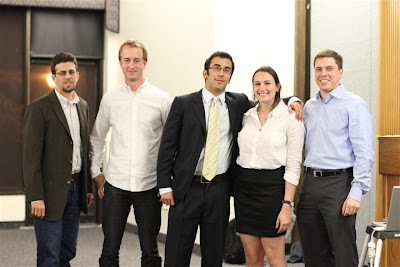 The winners of the audience choice awards were HeyCouldYa.com (formerly Emom.com) and ShelfRelief.com.
The Judges' Choice for the overall winners of the Undergraduate-led start-up track were Askapade and Nooch. 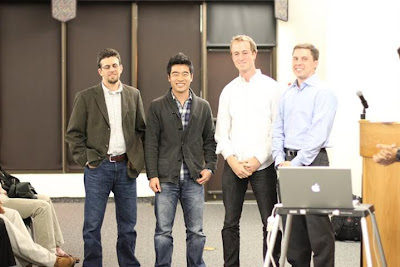 inCadence and ShelfRelief.com were the Judges' Runner-ups in their respective tracks.
Both the Judges' Choice winners and Audience Choice winners will advance to the Elevator Pitch Finals event on November 12th at Duke University featuring Greylock Partners. Congratulations winners!

* To encourage freshmen to participate, we created a Best Freshmen-led Team prize of $150. We had four freshmen teams (who, randomly assigned, were all competing in Track 2). So as not to bias the judges, we did not tell them about this prize beforehand. In the case that no Freshman-led team was awarded points in the judging process, we were going to ask the judges independently to select a Freshmen-led Team prize winner. As it turned out, Scribblit received points in the judging process and was awarded the prize.


Congratulations, Scribblit.
Pictures of tonight's event can be found here: http://picasaweb.google.com/hwr2duke/Day2OfTheElevatorPitchCompetition2010DukeStartUpChallenge#
(Thanks to Olgun Kukrer '12, and Tim Canavan '12)