A great night with almost 40 teams competing in the IT & Media Track and the Products & Services Track (which functions as a miscellaneous track for teams that don't fit the other functional tracks).  We had two rooms that were standing room only.


IT & Media Track
The judges were: 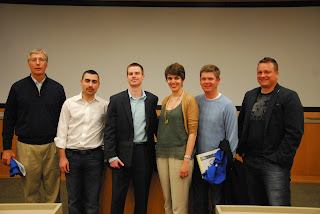 Sidewalk describes itself as follows: "Get more, pay less: spend smarter with the Sidewalk app. Businesses get foot traffic on demand, and you get great deals - everyone wins."
Siren Alerts is a personal alert application to be used in lieu of restaurant pagers.
Also mentioned was the Judges' Runner-Up: Redeemio
Redeemio: the disruptive innovator in the daily deal “grouponomy.” Specifically? Aggregation. Personalization. Lead-generation. In a billion-dollar market.
Products & Services Track (miscellaneous)


Advancing to the Elevator Pitch Finals with Greylock Partners on November 12th are: 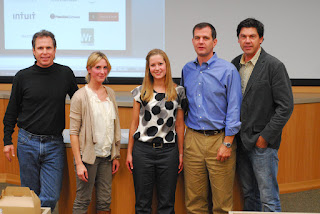 Advisync asks, "Ever wonder where will you go? Navigating the many different paths can be an arduous process, but what if there was someone, something out there that could help you find the path so you can get going, faster? Advisync is a new suite of tools to provide smart recommendations to you based on our unique data mining algorithms. Advisync. Sync Different, Be different."
Drink-Up Device asks, "Ever wonder what is really in the bottom of your red plastic cup? With this discreet alcohol concentration sensor you will know whether you are getting ripped off or should hold back on that second round."
Also mentioned was the Judges' Runner Up: AirMart
AirMart is a store that sells and packages groceries and other essentials conveniently for travelers upon landing at airports.

Pictures of the event are here: http://picasaweb.google.com/hwr2duke/Day3OfTheElevatorPitchCompetitionPartOfTheDukeStartUpChallenge# (Thanks to Olgun Kukrer for taking the photos in both rooms)