With over 400 in attendance, Duke celebrated the cornerstone event of the fall, the 5th Annual Elevator Pitch Finals with Greylock Partners! The evening featured a lineup of 18 Duke student startup company pitches led by the winners of each of the 8 different qualifying track competitions held during the week. Each competing team had exactly 1 minute to convince the judges and the audience why their company was worthy of the $5000 Grand Prize.

Following a welcome from hosts Jonathan Lee (Fuqua ‘11) and Meghan Gallagher (Fuqua ‘11), tonight’s judges were introduced. Each judge had extensive experience with entrepreneurship and the challenges of building successful start-ups. Judge David Thacker also served as the Keynote speaker for the evening and addressed the lively, vuvuzela-wielding crowd with insightful lessons in entrepreneurship from his early experience at Google and more recently as a venture capitalist with Greylock Partners. Judging tonight’s event were: 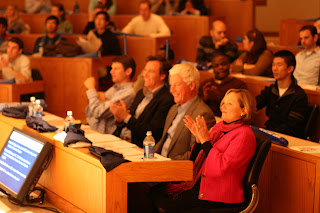 David Thacker '97. Associate Partner at Greylock Partners, Menlo Park, California.
Joining Greylock in 2008, David’s primary focus includes consumer Internet and enterprise software. He played a key role in Greylock's investments in Cloudera and Pandora and is closely working with several portfolio companies including Auditude, Oodle, Redfin and TellApart. David is currently on the board of directors at Gowalla, a location-based mobile social network. Prior to Greylock, David was a group product manager at Google. During his five years at Google, he oversaw the development of key components of the AdWords advertising system and led a product management team focused on new products for advertising agencies and strategic partners. In addition, David relocated to Europe for two years where he built Google’s product development organization in the region and drove the expansion of Google’s products into international markets. Earlier in his career, David held product development, technical consulting and sales roles at pcOrder, an enterprise software company that provided e-commerce solutions to the computer industry. During this time, pcOrder held an initial public offering (NASDAQ: PCOR) and was later acquired by Trilogy Software. David has also worked at Credit Suisse First Boston, IBM, and Electronic Arts. David holds a BA in Computer Science and Economics from Duke University and an MBA from Harvard Business School.

Tom McMurray '76, '78, '80. Founder and President of Marine Ventures Foundation (MVF) and former General Partner at Sequoia Capital, Menlo Park, California.
Tom was a general partner at Sequoia Capital in Silicon Valley for nine years. He is the Founder and President of Marine Ventures Foundation (MVF), a family foundation that both conducts and funds innovative conservation research and advocacy for pelagic fisheries and also funds cold water stream restoration and advocacy work. Since forming the foundation in 2000, MVF has funded a wide range of scientific and educational programs for bluefin tuna, white marlin, bonefish, dolphinfish, whale sharks, striped bass, tarpon, trout and forage fish such as menhaden. The foundation is also engaged currently in field tagging studies of dolphin (mahi-mahi) and bonefish in the Bahamas and Caribbean and also the development of GIS tools for studying migration patterns of pelagic fish.

Christy Shaffer, Ph.D. Entrepreneur, Biotech Executive, and Former CEO of Inspire Pharmaceuticals, Durham, North Carolina.
Dr. Shaffer has been Consultant of Inspire Pharmaceuticals Inc. since February 22, 2010, and served as its Chief Executive Officer since January 1999 until February 22, 2010. She also served as President of the organization from July 1, 2005 until February 22, 2010. She joined Inspire Pharmaceuticals Inc. in June 1995 as its first full-time employee, Director of Clinical Operations. She has fifteen years of experience in drug development within the pharmaceutical industry. She previously served in a variety of positions in the clinical research division of Burroughs Wellcome Co. including International Project Leader for cardiopulmonary programs. She served as Associate Director of pulmonary research in the department of pulmonary and critical care medicine at Burroughs Wellcome. She serves currently as a Director of Clinipace, Inc. and has been a Director of Inspire Pharmaceuticals Inc. since January 1, 1999. Dr. Shaffer served as a Director of The Council for Entrepreneurial Development from 2005 to 2006. Dr. Shaffer holds a Ph.D. in Pharmacology from the University of Tennessee and completed two years of postdoctoral training in cardiovascular research in the Biochemistry Department at the Chicago Medical School before her one-year postdoctoral appointment at University of North Carolina.

Peter Heffring. President and CEO of Expion, Raleigh, North Carolina.
For the past 15 years, Peter has been engaged in bringing the customer experience to the highest level at companies around the world. He was co-founder and CEO of Ceres Integrated Solutions, which quickly became a leading provider of Customer Relationship Management (CRM) Software and analytical services. Ceres was sold in 2000 to NCR for $90M. During Peter's tenure, Ceres provided solutions to over one hundred Fortune 1000 clients such as Wal-Mart, JCPenney, Wells Fargo, and Travelocity. Heffring is ready to jump back in with Expion. He is passionate about taking the principles of Enterprise Social Media Management and CRM to combine them with today's world of online social connections to yield even better customer engagement and retention.

Undergraduate-led Track 1
Askapade – a simple online game where people can ask their friends for help and receive virtual gifts for helping others.
HeyCouldYa.com – an online marketplace where students can post and complete favors for friends. 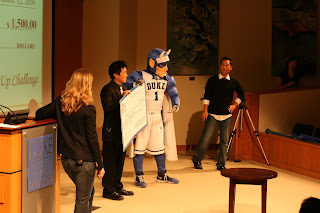 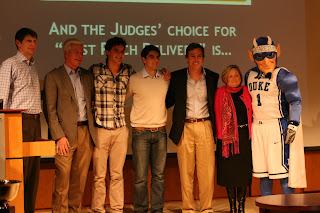 Thanks to everyone who attended tonight’s finals competition and congratulations to all of the winners!!
And thank you to Douglas Hanna '13 and A Small Orange, for sponsoring the Afterparty.